Rock climbing will finally debut in the 2020 Olympics (now starting in July 2021). The event is a combined format that will comprise of three climbing disciplines, bouldering, sports climbing and speed climbing. Each climber with one goal, to take home the gold for their country.

The event is scheduled to take place Aomi Urban Sports Park, located in the waterfront Bay Zone of Tokyo, Japan.

There have already been qualifying events for the 2020 climbing event (and there is no indication that climbers will have to requalify for the 2021 event), leaving us with 30 competitors, 15 women and 15 men. There will be 40 competitors total so 5 more competitors for men and women.

Only three men and three women will medal, Gold, Silver or Bronze.

Who is the competition for?

Besides fans, the climbers in the Olympics are mostly professionals that are already in the competition rink (indoor climbing) and few are outdoor climbers.

For example, Adam Ondra is a world-famous climber but he is known for climbing outdoors and isn’t known for being part of competition circuits.

Since the event is a combine competition, climbers will need to be world-class in all three disciplines debuting in the Olympics (Speed, Bouldering and Lead), if they want to medal.

Being proficient in each discipline is unheard of, which makes this competition even more interesting since some climbers will be significantly better at one discipline than they are at the other two.

Climbers from around the world participated in IFSC Combined World Championships and Continental championships to see who would qualify for the 2020 Olympics.

For details about the competitors, I did a write-up about each of them here (who is competing at the Tokyo Olympics)

If you want to learn more about these climbers, check out this article: Who is Competing In The Tokyo Olympics for Climbing?

Speed climbing is the first competition and it will set the tone for how climbers need to climb on the other two disciplines to win.

Unlike the other disciplines, speed climbing is a problem/route that is the same every time and climbers are able to train on the exact route for their entire career. In addition, climbers will rely on explosive movements that they have practiced thousands of times before.

If a climber begins climbing before the buzzer, they will be disqualified. However, if they fall or don’t finish, that doesn’t mean they automatically loose. Since it is set up in a bracket structure, they will have a chance to climb again.

Speed climbing has been seen as a controversial pairing with bouldering and sports climbing in the climbing world. This is likely because it is significantly different than the other disciplines and requires an almost completely different skillset 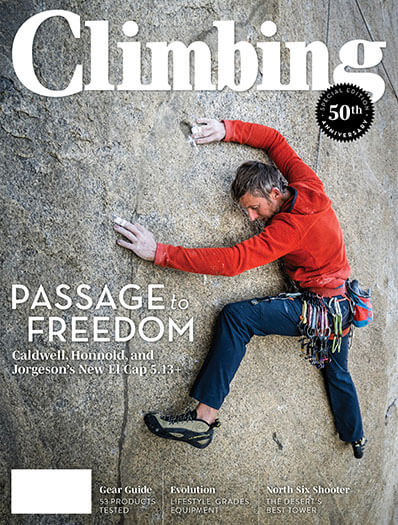 Climbing magazine is among the best climbing-focused publication and a subscription is a great way to have a fun picture-full magazine sent to you throughout the year. For pricing and to start your subscription, click here.

Bouldering is a common competition discipline and is known for the strength and technique required to complete the routes. Every climber will have time to review each route before they go to a different area out of view of the climb (frequently behind a curtain or the wall) and wait for their turn to climb.

One challenging rule that has already affected climbers during the qualification round is about getting blood on the route. If you split a finger open or cut your knee, you are not allowed back on the route until you tape it.

This is an important rule to ensure the safety of other climbers but it can also be detramental to climbers when they are short on time.

For example, when this happened during a qualifying competition, the climber didn’t speak the same language as the judge so it was difficult for her to understand that she needed to tape up. Because of this, extensive time was wasted on getting her to tape her finger and she wasn’t able to complete the route.

To prevent advantages, climbers will not be allowed to watch other climbers attempt the route. This will ensure that they don’t have a chance to learn from another competitor’s technique or means of getting up the climb.

There are no spotters so if a competitor falls, they will rely on themselves to land in a safe manner on the extensive padding below. However, injuries have been known to happen.

Sports climbing is the most recognizable climbing discipline and is known for endurance and technique to reach as high on the problem as possible within the given timeframe. In most competition, only one or two climbers will reach the top, if any. Climbers do not get allocated time to review the route so any time reviewing the route before they start the climb will be taken from the time they get to actually climb.

Just like in most sports climbing competitions, your feet can’t go above a quickdraw before clipping in. Doing so will end your climb.

If you fall, you are not allowed to attempt the climb again, even if there is excess time remaining. Sports climbing is a little different because falling can result in a lengthy fall, which can be dangerous. Especially if a they hit the wall on the way down.

Professional belayers will provide slack as needed and will also be the person preventing a climber from hitting the ground if they fall.

Each athlete’s overall standing will be determined by multiplying their placements for each event, with lower scores ranking higher.

If climber A places 1st in speed climbing, 8th in bouldering and 3rd in sports climbing, the score would be 1x8x3=24.

If climber B places 8th in speed climbing, second in bouldering and 1st in sports climbing, their score would be 8x2x1=16.

Climber B would win.

Adding climbing to the Olympic games is world-changing for many climbers and hopefully for the rest of the world as it will introduce one of the best sports (I’m biased…) to those that may not know much about climbing.

However, with all of that excitement, there are growing pains for both the sport inside the Olympics and how it will be broadcasted to the public.

For example, many climbers have expressed frustration that three very different disciplines are part of one combine event.

Speed climbing has gotten the most buzz but even combining sports climbing and bouldering into one event is making climbers nervous. The ability to train for all three disciplines is difficult, not to mention time-consuming.

Hopefully, with the Olympics being pushed back to July of 2021, it will give everyone enough time to become more proficient at their weakest discipline and more competitive in their strongest discipline.

However, depending on how popular the event is in the 2020 Olympics and the 2024 Olympics, we may eventually see three separate events with separate medals. Which would allow climbers to focus on their favorite discipline instead of a little of each discipline.

There are other growing pains such as broadcasting the event.

For example, when ESPN broadcasted IFSC qualification competitions, it was obvious that one of the hosts had never watched or attempted climbing before. In addition, they didn’t know the rules or basic climbing technique so they weren’t able to commentate anything of value about the event.

Hopefully, by the time we are all watching the Tokyo climbing competition, all TV commentators and hosts will display some knowledge of climbing so that people who don’t understand climbing can learn from them.

Lead climbing and bouldering will remain a combined event and speed climbing will become it’s own separate event.

Not only does this mean that climbing will have a second chance to win everyone’s heart (which it will no doubt do so in the 2020 Olympics but it also gives a better chance for speed climbers to medal (because they will have their own event) as well as increase the chances for sports climbers and boulderers to medal (since they won’t need to train for speed climbing).

More About Training for Climbing: